skip to main | skip to sidebar

The wind through the tree branches blow
And through the stream the waters flow
But what is this sweet sound I hear
Listen close and follow near
The ocarina music sweet
Is a gift, a pleasant treat
Follow it and you shall hear
The sound that I do hold so dear
How nature sings this soothing sound
It is a treasure to be found
And every nation shall rejoice
to hear the ocarinas majestic voice
2.A minute or a day
What do you do, what do you say
When you the ocarina play
Play a tune or make a song
Play a minute or all day long
3.Ocarina Haiku
Ocarina sweet
Beautiful musical wind
All players rejoice
4.Kiss the wind
Kiss the wind with your sweet sound
Tenderly touch the heart
As your music reaches near
Your mystery I'll always hold so dear
5.Hero of Time
Music playing
We adore
Valiant effort
Ending war
Bringing peace
As we declare
Music flowing
In the air
Ocarina
It is called
That brought
The great Tryrants
Downfall
The Hero of Time
His powerful key
Ocarina of time
For all to see
6.Little flute
This little flute
Born of wind and clay
Makes a gracious tune
That I may play all day
You see my ocarina here
You want it but you see my dear
It is mine, I'll never part
Find your own, a piece of art
Playing music
Soft or loud
Round about
May start a crowd
And all shall see
What joy it brings
To hear
The ocarina sing
Its soothing sound
Shall satisfy
Their need to hear
Its wondrous cry
7.Songbird
Songbird the ocarina is
Listen to its voice take wings
Listen as the Angel sings
Feel its splendorous bliss
Grant my heart's every wish
Posted by Luis Echevarria at 2:59 PM 2 comments:

A Dark and Stormy Night


I believe that Halloween is the best holiday. When I tell some one this, they usually act either excited or mortified, but they always ask "why?"

The "why" isn’t really that hard. "Its fun." I usually don’t go into details, because most of the time they don’t care. I like it because it’s thrilling. If you’ve ever scared a friend, parent, or sibling, just to make them mad, you know the feeling.

I can be creative with it, no other holiday is like that. Christmas has Baby Jesus, Santa Claus, and reindeer, that’s pretty much it. Valentines day: hearts, bad chocolate, and a winged baby with a bow and arrow. Halloween comes with witches, vampires, werewolves, ghosts, and goblins, magic, myths, legends, death, mystery, and horror. So much more variety, so many more options.

Back to the horror. Who doesn’t like a good horror movie? Horror is a large and very successful genre. I’m sure everyone over the age of ten knows what Freddy Krueger looks like, I knew who he was long before I saw a movie with him. Well, Halloween brings horror to life. Everything from the movies, without the danger that the characters experience, what’s not to like?

With Halloween, there is imagination. If you’re in a haunted house, something as simple as a dark corner, can be much more. A bush rattled by the wind make you wonder what’s there, will something pop out? There is suspense in even the simplest things. I was out late once, It was a dark and stormy night, and I heard an animal in a bush, I thought “Is it a raccoon? Is it rabid? Will the raccoon attack me?” Imagination creates the fear.

Now imagine you’re in any costume you want, chances are, you like it. Costumes can change your personality. They allow you to be something you’re not. People can create entire characters, with histories and abilities. Things that we cannot do or be. You could be an alien, or werewolf, a fireman or cowboy. The possibilities are endless.

Halloween has almost endless possibilities. There is something for almost everyone, from haunters to the common individual. These are the reasons I believe Halloween is the best holiday.
Posted by Luis Echevarria at 8:33 PM No comments:

Go now said the bear to his precious fish
You'll find other bears and become their dish
And I myself will find fish in abundance
And so the fish left
The bear hadn't seen one since.
Many seasons had past
And the bear thought it out
He needed that fish
There was really no doubt.
Miraculously the fish had turned up
This caused the bears happiness to runneth over his cup.
They met with a bang
What a joyous affair
Athough in the end
The fish found other bears
Posted by Luis Echevarria at 12:00 PM No comments:

Edmund Froen was a conceded,self-centered man.Out of the whole town he cared only of himself, and was constantly trying to make himself better.One day he decided to employ the help of The Bottle Lady,a mysterious old lady who had the ability to grant wishes in return for a seemingly normal object.She said to him "In two days time,bring me the skull of a long dead turtle".And off he went.

He went looking in a swamp on the outskirts of town. After some time,he found what he thought was a turtle skeleton. Now,he wasnt very well educated and didnt know exactly what a turtle skeleton looked like,but he knew the general shape. So he took the skull of what,in truth, was a toad...

The Bottle Lady was not pleased.She said "your wish is now granted". At that he became very tired and fell asleep.When he awoke,he found he had changed.He now looked like a large,demonic toad, with horns above his eyes and a long feathered tail."You are now better... for everyone else"she said with a cackle.And she thought to herself,"What a lovely pet".
Posted by Luis Echevarria at 11:48 AM No comments: 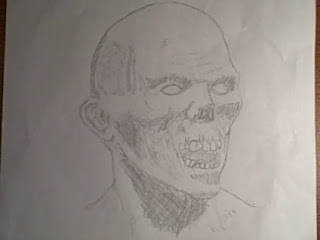 this is a drawing of a zombie I made today .It is based on a pic I found on the internet.
Posted by Luis Echevarria at 8:29 PM No comments:

This is a short story I wrote for school.It is the sequel to "The Tell-Tale Heart" By Edger Allen Poe.

"To my great surprise, they hadn't believed me, nor did they check underneath the planks in the case.They replied " You must just be confused from your dream,you may be ill.You should get some rest." I gave no reply as the left the house.As I was pondering, I concluded that only I could hear it because of my sharpened hearing. Yes! That had to be it. It had been an hour since the men had arrived so I decided to rest.

I had been awoken by the ringing of church bells. I sat up and contemplated what now to do. I realized, now, that I could enter the chamber that the old man never allowed. An explosion of curiosity formed in my mind.I had not thought of that during the whole time plotting the murder. I made my way hastily and entered for the first time.

I was astounded by its appearance. The walls and floor were a smooth white and there was a large desk with many profound objects, the only recognizable thing was a rare electric-lamp.There was also, to my surprise, what seemed to be a decrepit arm connected to a multitude of wires. I was bewildered as, upon closer inspection, I saw it twitch! I also found the old mans journal.It stated that he had created a concoction, to bing the dead to life.I presently found that it was hidden in the floor of his bed room! I sped to the room to find a noise coming from beneath the planks.

It was not the sound of the heart but that of a wretched beast trying to from its hold.As I stood dumbfounded I was struck by terror and couldn't move.The floor broke open as the body, partially reassembled, tore out.The eye was back to haunt me! I ran to the front door as I tried to escape,but found it was locked. Searching my surroundings I saw the key was missing! I was cornered!The old man I loved was back, but the eye was tearing at my soul I shrieked out loud as I took what I knew would be my last breath."

I'll just leave it to you to figure out how he was able to write this.
Posted by Luis Echevarria at 9:47 PM No comments:

Luis Echevarria
Castroville, California, United States
I love any thing halloween or the related.I like to write short stories and make short films.I also like to build props.I'm constantly coming up with new ideas.oh yeah,I also think I might be a werewolf.